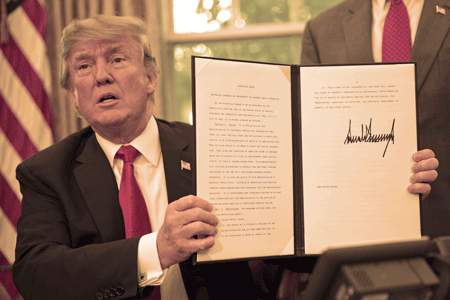 Why Trump Puts Tariffs on Steel?

Human being invented many tools throughout the history. First we used stones with sharp edges that we call these times as the Stone Age. then Iron Age came. and never gone…

Since the Iron Age humans developed big cities, big industries, new economies and any country in the developed world used iron ore and steel industry as a strategic development agenda..In the last big war, Steel and oil were the two main strategic materials that defined the start and end of the war.

After the war intellectual people and politicians used the importance of steel and coal to create a peaceful Europe, so European Coal and Steel Community established, which turned into a great economic power of European Union. Yes the name consists “steel”.

The first important mistake of EU was not taking Turkey inside, that would make the union a political power besides economic power, and the second was the Brexit. It is a very strange coincidence that Trump administration’s anti globalism attacks and Brexit are happening at the same time. Everybody knows that UK and USA are twins that have same point of view in world affairs. They are now together demolishing the order they created 70 years ago, and again together.

There is smell of gunpowder in the air for a long time. Free trade and globalization helped fair sharing of wealth with some concerns of strong corporations. If two countries having good and fair trade, they won’t fight.

My concern is restraining trade after saying the opposite for 70 years will create enormous stress on the economies that depend on global trade. This stress may cause political faults and critical issues that diplomacy may not resolve.

To keep world peaceful we need to talk about multilateral fair trade relations instead of bilateral ones. And I wish Trump will stop agonizing international trade.