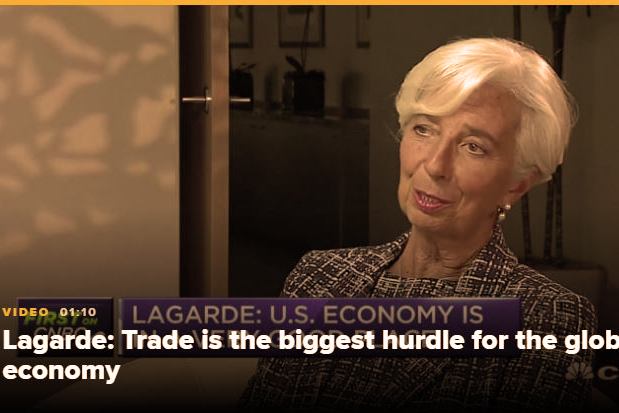 The trade war is weighing ‘like a big, dark cloud’ on the global economy, says Christine Lagarde

For incoming European Central Bank President Christine Lagarde, the U.S.-China trade war is the biggest threat to the global economy.

Lagarde, who has run the International Monetary Fund since 2011 and was selected in July to replace Mario Draghi on Nov. 1, said the tariffs that the U.S. and China have slapped on each other’s goods are set to shave 0.8% off global economic growth in 2020.

“I think trade — threat against trade at the moment — is the biggest hurdle for the global economy, yes, indeed,” she added.

Top trade negotiators from the U.S. and China are set to resume talks next month in Washington. The tit-for-tat tariff threats in the past year and a half have roiled financial markets and sparked concerns about a global recession.

“The longer this lingers, the more uncertainty sinks in. And if you’re an investor, if you’re an enterprise, whether small, medium size or big, you’re not going to invest, you’re going to wait. You’re going to sit and wonder where the supply chains are going to be organized,” Lagarde said in the interview that aired Monday on CNBC’s “Squawk on the Street.”