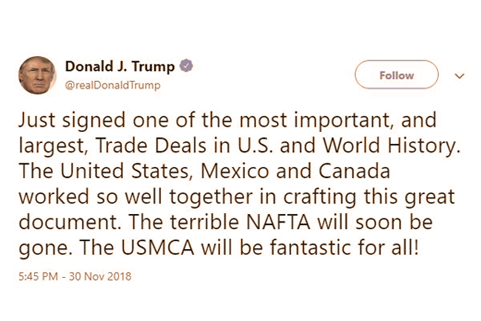 According to Michael Collins of USA TODAY:

President Donald Trump and the leaders of Mexico and Canada signed a revised trade pact Friday that changes many of the rules governing the free flow of commercial goods across North America.

The United States-Mexico-Canada Agreement, announced with fanfare by the leaders of all three countries in late September after months of on-again, off-again negotiations, will replace the 24-year-old North American Free Trade Agreement. That agreement, known as NAFTA, essentially eliminated tariffs on most goods traded among the three countries.